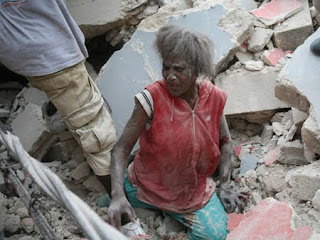 Hundreds of thousands of people may have been killed in Haiti by the severe earthquake which struck the impoverished country's capital.

Previous of ImagesNext Most radio and television stations stopped functioning, and the airwaves were only punctuated by a few rare radio appeals for help Photo: AFP/GETTY IMAGES
A man being helped following a powerful 7.0 quake that struck Port-au-Prince on January 12, 2010 Photo: AFP/Getty
A young girl cries after Haiti's capital Port-au-Prince is hit by a powerful earthquake Photo: PHOTOSHOT
Haiti's presidential palace before (top) and after the earthquake Photo: AFP/GETTY
A major international relief effort was launched yesterday to hurry rescuers and suppliers to the Caribbean country as the streets of Port-au-Prince were left strewn with corpses and shattered buildings.

Haiti Earthquake updates
Little escaped the devastation wrought by the grade 7.0-magnitude quake that struck the area in the south of Haiti on Tuesday afternoon.

Up to 200 United Nations staff in the city were unaccounted for last night including the civilian head of mission, Hedi Annabi of Tunisia, after its headquarters was flattened.

Monsignor Serge Miot, the city's Catholic archbishop, was a confirmed casualty, his body pulled from the rubble of his offices while his vicar general, Charles Benoit, was missing.

The presidential palace, Haiti's grandest building, was substantially destroyed and its incumbent, Rene Preval, described the scene in his capital as "unimaginable".

He said he had been stepping over the bodies of the dead and hearing the cries of the trapped underneath his country's collapsed parliament building.

His prime minister, Jean-Max Bellerive, said the government believed the death toll in the city of two million people was "well over 100,000" while Youri Latortue, a senior senator, said it could be 500,000.

Both admitted they had no way of knowing but aid workers on the scene reported widespread destruction and suffering as severely injured people lay in the streets, unable to get medical assistance.

Haiti, the poorest country by far in the western hemisphere, was already struggling to recover from a series of severe hurricanes and flooding in 2008.

The country sits on a major fault line and scientists have warned for years that it was likely to be hit by a major earthquake.
Posted by Abu Hatim at 12:52 PM